The article detailed multiple accounts and a myriad of sources reflecting Harvery Weinstein (Hollywood powerhouse) and his predatory behavior over 40 years. Over a period and days and weeks, more victims came forward. Today, his alleged victims include Ashley Judd, Rose McGowan, Angelina Jolie, Selma Hayek, Rosanna Arquette, Kate Beckinsale, and 80+ other woman that have come forward publicly. Social media was abuzz with people talking about the stories. 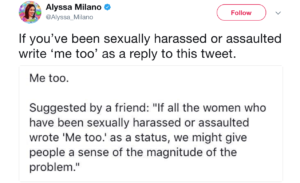 Ten days after the article was published by the New York Times, Hollywood actress, Alyssa Milano, tweeted a message stating, “If you have been sexually harassed or assaulted write ‘me too’ as a reply to this tweet.”

The. World. Stopped. And. Tweeted: #MeToo

Twitter, Facebook, Instagram. Tarana Burke, a social activitist, began using the phrase in 2006. Milano helped popularize it. Posts were everywhere with seemingly everyone (women, men, young people, old people, people of every race, ethnicity, and religious preference) sharing that they had experienced some form of harassment.

Since the story broke, the #metoo movement has been credited with exposing multiple scandals not only in Hollywood but elsewhere. Some notable cases include:

Th California government website writes, “State regulations define sexual harassment as unwanted sexual advances, or visual, verbal or physical conduct of a sexual nature. This definition includes many forms of offensive behavior and includes gender-based harassment of a person of the same sex as the harasser. The following is a partial list of prohibited behavior:

While the Sacramento Bee reported in January 2018 that the State of California paid more than$25 million in the last three fiscal years to settle sexual harassment claims against state agencies and public universities, Ventura County is fortunate not to have scandals of these magnitudes.

However, in the last 5 years, stories of sexual harassment have made local news, including that of the Conti Family based in Westlake Village.

Conti reported the issue to a teacher, but the problem escalated.

“It is a painful ordeal to see your loved ones go through this,” shared Larry Conti, father of Gianna Conti. Gianna alleged that the fellow student and his friends repeatedly harassed her with verbal sexual advances along with efforts to intimidate her and her family. Gianna’s brother, Dominic, and father, Larry, ultimately confronted the young man. That event led to accusations by both parties of violence by the other.

“What made this very hard was that things got worse and not better after I told the school what happened,” shared Gianna Conti, who is now 19 years old and a sophomore in college. Gianna ultimately left Westlake High School for Oaks Christian. “The harassment was constant. This was not one event with a possible misunderstanding between two people. This was ongoing and repeated efforts by him and his friends to make me feel belittled and berated with off color comments, presence at my sports practices watching me, and uncomfortable encounters throughout our time on campus attending classes.”

“It’s hard to believe it has been 4 years,”explains Gina Conti, Gianna’s mother. “It was a painful time for my family and our saving grace was the support we received from our friends and community. This is every parent’s worst nightmare.”

Efforts to interview the young man, who is now also of college age, were not successful.

After Gianna left Westlake High School, the young man was expelled for sexually harassing another student on campus.

COMING UP: Article in a Series: Part 2- Heroes of #MeToo

(Thousand Oaks, Ca) “Survivor experience is so unique there is no way we can predict it,” shares Gwendolyn Bouchie of Darkness to Light, a non-profit committed to empowering adults to prevent child sexual abuse. “We […]

Whatever happened to Dominic & Gianna Conti?

(Westlake Village, Ca)  There are moments in our lives that can define us. They play like tape recorders in our head, often on repeat. We hope during those moments we can be shooting the winning […]

Series: What Are Our Kids Reading In School?

Articles in this series examine what books are approved for our students to read in the State of California. Being a parent to a teen can often present unique challenges of worrying about their health, […]