(Thousand Oaks, Ca) Conejo Valley residents interested in providing their input on new districts maps can attend the first of three hearings scheduled over the next 30 days. The meetings are a requirement before officially approving voter districts. 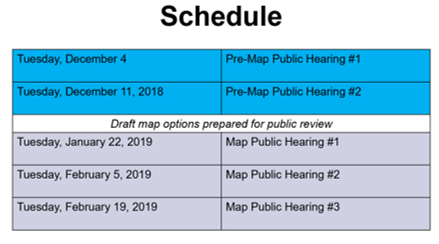 In June 2018, Conejo Valley Unified School District received a demand letter from husband and wife law firm, Shenkman & Hughes, for compliance to the California Voting Rights Act (CVRA). At the November 20 meeting, the CVUSD Board began the process of shifting to districts based elections in place of at large elections. The law requires that once the process begins it be completed in 90 days, which is February 20, 2019.

Three scenarios have been drafted for public comment. Each scenario provides options to reorganize around concentrations for voting minorities. the key challenge is in the center of Thousand Oaks along with 23 corridor / Sunset Hills area to the north of the district. This area presents the greatest challenge for drawing district line equitably.

Shenkman & Hughes represent Southwest Voter Registration Education Project (SVREP), an organization founded in 1974 in order to ensure the voting rights of Mexican-Americans in the Southwest.

According to an interview with the Los Angeles Times, Shenkman was first approached about the CVRA when Darren Parker, chairman of the California Democratic Party’s African-American Caucus. He shared that he was experiencing racial disparity in Palmdale. Shenkman responded to the call saying, “I’m a Democrat, and this sounds important, I’ll look into it.”

Now nearly 7 years later, Shenkman has sued over 200 cities, school districts, and other municipalities and has won 100% of his cases.

Niche Inc. Names CVUSD #1 District in Ventura County for 2019 and in Top 5% Nationally

(Thousand Oaks, Ca) On August 20 at around 3:00pm, Dr. Amy Chen received an email from the Ventura County Elections Division with the subject line “Ballot Designation Request.” Dr. Chen, a candidate for the Conejo […]

(Thousand Oaks, Ca) Conejo Valley Unified School District Board member, Mike Dunn, is not short on stories or controversy. After 14 years on the school board, Dunn holds a list of accomplishments to the benefit […]