(New York City, NY) Brandon Straka had a moment of awakening less than a year ago that caused him to question things happening in the media. It led to losing friends, isolation and even a brief period of depression. He emerged with an idea to share his experience through social media using a video he created just 3 short months ago. This video has now gone viral with 2 million views.

The hashtag #walkaway movement is now being used by thousands to explain why they are walking away from the Democratic party.

“I voted for Hillary Clinton and when she didn’t win I was devastated. I cried and literally thought the world came to an end,” explains Straka. “I was one of those people that hated Trump with a passion and would become more enraged with each new negative story that came out about him.”

But things changed when the story of then candidate Trump was reported to be mocking New York Times investigative journalist, Serge Frank Kovaleski, who suffers from arthrogryposis, an illness  which impacts joints with limited range or motion or even being stuck in certain positions. Kovaleski’s right hand is impacted by the disease where it is immobilized in a singular position.

Then candidate Trump had asserted that people in New Jersey were cheering 9/11. Using Kovaleski’s article citing, “law enforcement authorities detained and questioned a number of people who were allegedly seen celebrating the attacks and holding tailgate-style parties on rooftops while they watched the devastation.”

In response to the Trump campaign’s adoption of his report as an independent verification of New Jersey-based celebrations following the destruction of the World Trade Center, Kovaleski issued the following written statement:

“I certainly do not remember anyone saying that thousands or even hundreds of people were celebrating. That was not the case, as best as I can remember.”

Trump was sharply criticized worldwide as a result because it was widely believed he mocked Kovaleski’s disability.

Following criticism, Trump said that he was not mocking Kovaleski’s disability because he did not know what Kovaleski looked like.

Kovaleski responded to this by stating that while reporting on Trump for the New York Daily News, the two had been on a first-name basis and had met face-to-face on a dozen occasions, including interviews and press conferences in the late 1980s. Trump responded that he dealt with many reporters everyday but it is possible that they may have met him over 20 years ago in the 1980’s. However, he did not recall meeting Kovaleski.

“Catholics 4 Trump” created a series of video clips showing Trump using the same gestures over the last 20 years to mock someone lying. Straka saw the video and realized that the media frenzy was a farce. (To see video, click here)

Straka asked himself, “If the media lied about this, what else did they lie about?”

Since then, multiple videos have been released also debunking the media’s depiction of Trump mocking the reporter, such as the following click here.

From there Straka’s journey began.

Straka, a white gay man living in New York City, shared what he was learning with his friends. He was met with hostility and outrage. “My friends were so angry at me and ended up cutting me off. I felt so isolated and alone. It was awful.”

Through his own journey he found new friends and started to feel like he was getting back on his feet. He explains that one day, he was going on a run and the thought came to him, “Once upon a time, I was a liberal.” He used this first sentence to create what now has become an international social media movement.

“Not only is this now in big cities and suburb here in the US, but also in Australia, Russia, Israel, and the United Kingdom. It seems like every country around the globe is affected by this leftist ideology and they are responding to our video and movement.”

Straka has created a group called “Unsilent Minority” under which his videos are linked. His website will be launched in the coming weeks. He has used the hashtag #walkaway and #WalkawayCampaign for those posting to Facebook, Twitter, and YouTube. The hashtags are trending on all the major social media platforms. To date, the video has 2 million views.

While working to pay the bills and work his “day job,” Straka has been interviewed by the Guardian, The Daily Mail, Fox News, and other major news organizations. He has recruited the help of friends to assist him in managing the tidal wave of inbound social media posts, his website, emails, media requests, and the day to day management of the movement.

Straka has started both a GoFundMe page (click here) and a Patreon page (click here) for those wishing to support him so that he can continue building his website, paying for attorney support, and more surrounding the campaign.

“I had no idea this would become what it has. When you listen to these stories, people are really being set free.” 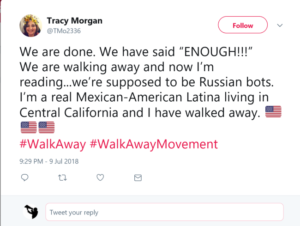 Californians have seen a mass exodus due to rising costs and quality of life. According to the IRS, from 2004 to 2013, California lost roughly 3.9 million people. Based on tax returns, the IRS migration data is considered the gold standard for measuring population shifts, though it lags two to three years behind the current date.

Local Ventura County residents have seen the rise in housing and cost of living to some of the highest levels in the country, according to a report recently released by Chapman University. Recent changes to state laws have also caused many to take to their local city councils to fight recent statewide legislation that makes it more difficult to put criminal illegal aliens in jail, especially those committing violent crimes.

Ventura County residents have been watching.

When asked what they and fellow residents are experiencing, one social media commenter stated, “I have been reading the testimonials. Not sure how it’s being received by others, but I am inspired. The interesting theme that I have noticed is many of the people who are giving testimonials aren’t necessarily die hard Republicans or die hard Trump supporters. They are just so sick of the tactics of the liberals. They are all saying that liberals have kept them enslaved, and they are rising up.” 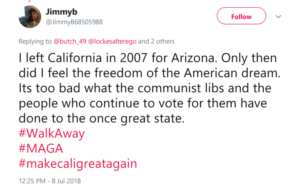 Another local resident stated, “It’s very motivating and empowering because for so long conservatives have been silenced, shamed, and persecuted really. This is one of many things happening that just makes me feel validated in my political point of view and just as a human being. I feel like Jennifer Grey in the final scene of Dirty Dancing when Patrick Swayze pulls her out of the dark corner and say.. ‘nobody puts baby in the corner.’ Lol. Liberals had done a good job of making conservatives ‘hide’ in the corners and I just feel like the days of casting us all as deplorables is over.”

One local father shared his support. “I am very happy that our young generation is starting to realize that they were being manipulated and taken advantage of. They are starting to dig deeper and look for the truth and facts before they make a decision versus taking Twitter input and think its gospel. Very promising for the future.”

Another commenter stated that she “started to follow him and everything he says makes so much sense. I believe he will blow up even bigger not only because of the media exposing him but so many people from the left are realizing what the democrats have become. He will do good for many! (sic)”

None of the above commenters were comfortable sharing their name or city of residence which continues to relay the fear felt by many for expressing opinions that diverge from progressive and left- leaning positions. 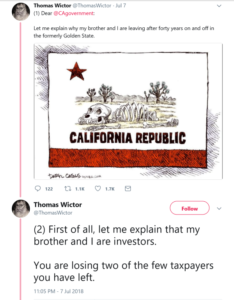