(Van Nuys, Ca) Zero Emissions vehicles are a strong trend in California and now one Ventura county resident is getting the very first fuel cell SUV in the United States produced by Hyundai. 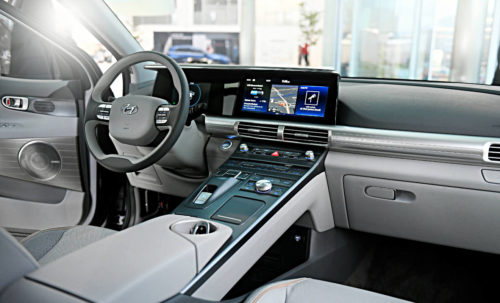 Customer Todd Hochrad of Ventura, California picked up his new SUV at Keyes Hyundai in Van Nuys to become the first U.S. customer to drive off in the new NEXO, the only mass-produced fuel cell SUV for the U.S. market, boasting a range up to 380 miles.

Hochard, a former scientist, was eager to add the benefits of this zero-emissions vehicle to his environmentally-friendly lifestyle.

Mr. Hochrad isn’t the typical automotive buyer, yet he’s the sort of customer looking to drive a zero-emissions, hydrogen-powered vehicle. More than 15 years ago, he purchased his first hybrid car and over the years has driven dedicated electric vehicles as well. His new NEXO will deliver about five times the driving range of his first all-electric car.

NEXO can be leased for $399 (Blue model) or $449 (Limited model) for 36 months and can be purchased for $58,300. The first year of maintenance is free of charge and customers are eligible for a tax credit (subject to individual tax circumstances) from the state of California for up to $5,000. Purchasers of new Hyundai NEXO SUVs will receive hydrogen fueling cards with a combined maximum value of $13,000 to be used during the first three years of vehicle ownership.

(Irvine, Ca) The analysts at Kelley Blue Book today reported the estimated average transaction price for light vehicles in the United States was $36,978 in November 2018. New-vehicle prices increased by $769 (up 2.1 percent) […]

About 300 miles away, the world’s leading innovators will attend the annual CES show

January 3, 2019 Maria Bertucci Business, Popular Comments Off on About 300 miles away, the world’s leading innovators will attend the annual CES show

(Las Vegas, NV) From January 8-11, companies from all over the globe will attend the annual Consumer Electronics Show (CES) to showcase the newest in consumer electronics to the market. CES is the largest trade […]