(Ojai, Ca) In our little corner of Ventura County, The Ojai Film Festival opened its 19th season with many films in competition including 450 submissions from 33 countries. 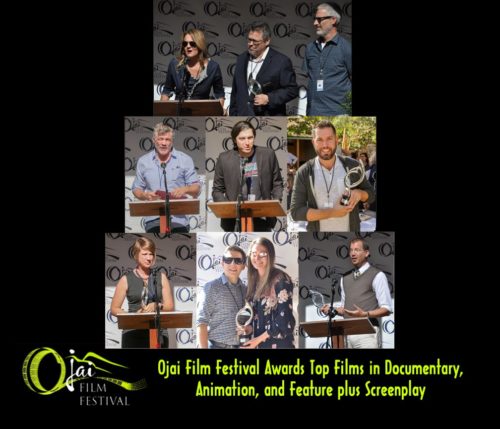 Artistic Director Steve Grumette viewed thousands of films since the festival’s inception and, along with an outstanding panel of jurors, selects the best for final competition.

“There has been a striking and very gratifying increase in the overall quality of submissions since the festival began in  2000,” said Grumette. “Although this is doubtless due in part to the increasing availability of high-quality, low-cost digital filmmaking equipment, we believe it is  largely the result of our steadily growing prestige on the international film festival circuit.”

Some of the outstanding foreign entries include:

“I want to express my deepest appreciation and gratitude to our Festival Jurors, the members of our Screening Panel and the hundreds of festival volunteers whose tireless work over the past two decades has made an indispensable contribution to the evolution of our festival from a local arts event into a cultural institution of international stature,” shared Grumette

The Ojai Film Festival runs November 1-11 with screenings at the Ojai Art Center and Chaparral Auditorium, plus special events, an award banquet, educational workshops and seminars and more.

History of the Event

After two years of intensive effort by more than a hundred volunteers, the opening of the first Ojai Film Festival occurred on November 15, 2000.

The Ojai Film Festival launched with two goals in mind:

In early 2002, the festival established itself as an independent nonprofit foundation, dedicated to continuing and expanding the traditions created during the first two years of operation.

The festival continues its commitment to enriching the human spirit by seeking out important films that in some way uplift people, help audiences feel good about being members of the human race or encourage them to live meaningful lives inspired by the examples of others.

Over the past few years, the Ojai Film Festival has expanded its creative platform with Focus Earth, a mini-festival of films and panels that focus on environmental issues presented by local filmmakers and community experts.

The Festival provides audiences a diverse lineup of titles from around the world. Past entries have represented over 43 countries. The Ojai Film Festival gives filmmakers access to a highly appreciative audience of savvy and informed film fans. Ojai’s growing importance on the festival circuit is reflected in the fact that legendary Hollywood producer Peter Guber told the audience at a recent Toronto International Film Festival that “Ojai is the next Telluride.”

(Thousand Oaks, Ca) Southern California’s largest sporting event is sharing details about its 2019 event and on Thursday, May 16 it will be here in Ventura County. The Amgen Tour of California organizers announced the […]

The Voice California is looking for great writers that enjoy sharing local news and feature stories. With a focus in Ventura County, The Voice is offered in Spanish and English and soon in Tagalog. Stories […]