After seven games, the Waves (5-2) are just one win shy of last season’s victory total. Abilene Christian (7-1) came into the game as one of 13 teams left in the nation unbeaten. But the Waves got off to a hot start, led 42-31 at halftime and maintained its lead throughout the second half.

The Waves hit six of their first seven shots to jump out to an 18-10 lead, and it then grew to 23-10 as Pepperdine held ACU scoreless for four minutes. Edwards’ third three-pointer of the first half gave the Waves their biggest lead of the contest at 33-17. His fourth three-pointer sent Pepperdine into the break with a 42-31 advantage.

Abilene Christian kept the game in single-digits for the first 10 minutes of the second half, and for much of the first 15 minutes. The Wildcats got the deficit down to as few as three points at 44-41. At 64-56, Ohia Obioha scored the next four points and the Waves kept the margin in double-figures the rest of the way.

Pepperdine finishes up a three-game homestand on Monday (Dec. 3) against CSUN at 7 p.m. In the wake of the Woolsey Fire, this will be “First Responders Appreciation Night” and first responders and their families will be given free tickets and food. The game will be shown on TheW.tv with Al Epstein on the call. 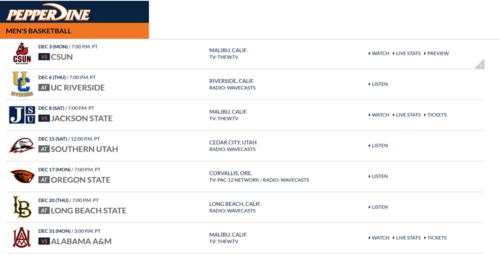