(New Orleans, La) The Los Angeles Rams dropped their first game of the season on Sunday, losing 45-35 to the Saints at the Mercedes-Benz Superdome.

The Rams were unable to complete an impressive comeback effort against future Hall of Fame quarterback Drew Brees and Saints’ wide receiver Michael Thomas, who finished with a Saints single-game franchise record 211 yards receiving and one touchdown.

L.A. will look to bounce back next Sunday back in the Coliseum against the Seahawks.

Here are seven stats that stood out in Week 9 against the Saints:

With his first quarter eight-yard touchdown carry, running back Todd Gurley cemented a spot in the Rams record books, becoming the first player in franchise history to score a touchdown in 12-consecutive regular season games. Gurley’s streak dates back to last season’s Week 14 game against the Eagles, when Gurley scored two rushing touchdowns.

No. 30 has now totalled 24 touchdowns since Week 14 a season ago —17 rushing, 7 receiving. Gurley surpassed former Rams running back Elroy Hirsch, who found the end zone in 11-straight games in the between 1950 and 1951.

Gurley’s touchdown also gives him the most touchdowns through the first nine games of the season in Rams history (16).

Gurley finished his afternoon with 13 carries for 68 yards and one touchdown.

Brees certainly felt pressure at times — even from the newest member of the Rams’ defense, outside linebacker Dante Fowler — but nonetheless were unable to bring Brees to the ground.

Interestingly, Goff also left the Superdome without taking a sack.

The Rams have recorded 22 sacks this season. 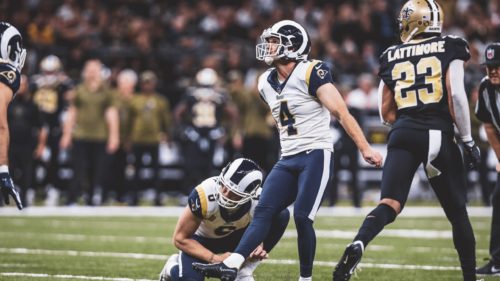 Zuerlein drilled a much needed 56-yard field goal to end the first half against the Saints, and is now tied with former kicker Jeff Wilkins for the most made 50-yard field goals in franchise history (26).

Zuerlein had two cracks at tying the record. He missed his first field goal of the afternoon — a 51-yard attempt in the first quarter.

Kupp took the record-tying score to the end zone 41 yards up the sideline on a 3rd-and-1 pass from Goff.

Following Kupp’s score, the Rams successfully converted a two-point conversion and tied the game at 35.

The Rams have now converted five-of-six two-point conversions in 2018 — which ties the franchise single-season record (5).

Woods finished his day with five catches and 71 yards, which marks his eighth-straight game with at least 5 catches for 70 yards or more.

The Rams loss in New Orleans means the end of a seven-game road winning streak.

A victory would have meant the second-longest road winning streak in franchise history. The Rams won nine-straight road contests from 2000-2002.

In L.A.’s most recent streak, the Rams downed the 49ers, Broncos, Seahawks (twice), Raiders, Cardinals, and Titans, dating back to Week 13 of 2017.

By: Myles Simmons (Detroit, Mi) It wasn’t easy getting there, but the Los Angeles Rams are the 2018 NFC West Champions. The Rams defeated the Lions, 30-16 on Sunday, becoming back-to-back division champions for the […]

Quotes & Notes 1/26: Brockers on facing Brady: “He’s going to try to avoid the pressure…it’s our job as D-linemen to get to him.”

January 26, 2019 Clarence Dennis #1 Local Sports Comments Off on Quotes & Notes 1/26: Brockers on facing Brady: “He’s going to try to avoid the pressure…it’s our job as D-linemen to get to him.”

(Thousand Oaks, Ca) Following each practice, Quotes and Notes will bring you what was said, who said it, and what it means for your Los Angeles Rams. “To be able to achieve something with people […]

With experience during the season, Rams confident in ability to stop Patriots late

February 1, 2019 Clarence Dennis #1 Local Sports Comments Off on With experience during the season, Rams confident in ability to stop Patriots late

(Atlanta, Ga) It took more than the 60 minutes of regulation for the Rams to learn their Super Bowl LIII opponent between the Patriots and Chiefs, who dueled to the point of overtime in the […]