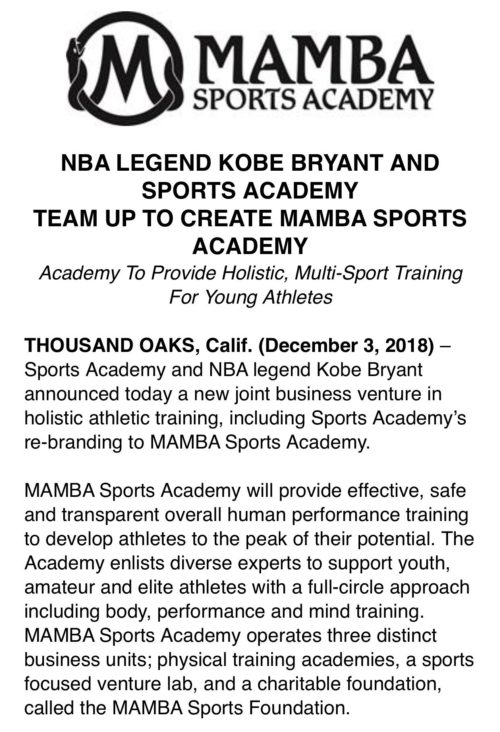 The Press release included a video which can be seen here by clicking here.

“Sports Academy has perfected the art and science of athletic training, from elite players to young kids getting started. MAMBA Sports Academy is a natural expansion of my commitment to educating and empowering the next generation of kids through sports,” said Bryant. “As a basketball coach to young girls, my team trained at Sports Academy, which is when I first experienced the superior level of services and attention to detail their experts delivered to our team. At MAMBA Sports Academy, we will focus on offering a premium experience on proper training for young athletes, and infuse a little ‘Mamba Mentality’ into their programs.”

“The Academy’s unique proposition of holistic training has attracted athletes of all sports and skill levels to work with our team. We’re extremely proud of the athlete community we’ve built in the Thousand Oaks area over the past two years,” said Faulkner. “We look forward to how Kobe’s involvement will move us forward in the areas of on-site training, digital cognitive training, content creation, investments and charitable endeavors. His ‘Mamba Mentality’ philosophy will no doubt have a major impact on the development of the next generation of athletes.”

Last month, the Sports Academy team was a pillar in Thousand Oaks as the community was impacted by the Woolsey fires. The Academy supported more than 3,500 effected families by opening its doors as a refuge, providing a place for kids to play, and collecting and distributing more than $20,000 in donated items for firefighters and volunteers.

MAMBA Sports Academy anticipates opening additional facilities in Southern California in the near future. The Academy re-branding is currently underway with all efforts at the facility and in market set for completion by January 2019.

In his new role as producer, storyteller and writer, Bryant created Granity Studios, a multi-media content creation company focused on helping athletes learn the process of excellence and maximizing potential. Granity Studios has launched several content projects including Kobe Bryant’s Muse documentary film, Detail on ESPN+ and the Dear Basketball animated short film, which won the 2018 Academy Award, and the 2017 Annie Award in the Animated Short category. Bryant served as creator and executive producer for all projects. Bryant’s investment platform, Bryant Stibel, provides strategic, financial and operational support to entrepreneurs and their companies, with a focus on the convergence of technology, media and data (TMD), as well as in industries such as sports and wellness, where TMD has the potential to create massive opportunities.

The MSA Venture Lab is driving the next generation of functional human performance products and businesses through incubation, investment, technical and business support and acquisition. The Venture Lab is focused on cognition in sports, the productization of the “elite athlete mindset”, driving the next generation training products, making strategic investments to enhance the full circle training model, and creating innovative STEAM program with the foundation. The first major product launch is a line of digital cognition training products from portfolio company Axon sports scheduled for release early January 2019. Kobe’s experience as both a high performing athlete and business man are expected to add greatly to the direction and strategy of the venture lab.

The MAMBA Sports Foundation is focused on creating a positive impact through sports. The foundation will focus on creating equal opportunity and access for youth athletes by funding and facilitating programs in leagues, schools, and facilities.

The foundation believes sports provide a powerful platform for developing learning skills, enhancing character traits and expanding personal values that translate into self-confidence and empowerment. The Foundation’s coaches will operate with the Mamba Mentality which is an ongoing system that develops skills, that values hard work and that demonstrates a deep dedication to the process.