(Ventura, Ca) Sheriff-Elect Bill Ayub is pleased to announce that Monica McGrath has been selected to fill the position of Undersheriff and Chris Dunn will be appointed to fill the position of Assistant Sheriff. These high-level organizational vacancies are behind the upcoming retirements of Undersheriff Gary Pentis and Sheriff Geoff Dean and will be effective November 18, 2018.

Monica McGrath is a 29-year veteran of the Ventura County Sheriff’s Office and has a wide diversity of experience in every division of the organization. Monica rose through the ranks and achieved the position of sheriff’s commander. Along the way she worked many assignments including recruit training officer, property crimes and sexual assault detective, internal affairs investigator, and chief of police for the cities of Fillmore and Camarillo. Having retired in 2016, Monica’s return to service with the Sheriff’s Office at the executive level adds an essential depth of perspective and experience needed to help guide the agency into the future. As the Undersheriff, Monica will serve as the Acting Sheriff in the Sheriff’s absence and she will have executive oversight of the entire agency’s operations. To read more about her, click here. 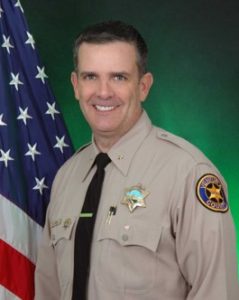 Chris Dunn is a 33-year veteran of law enforcement. Having begun his professional career as a Ventura County Sheriff’s Cadet, Chris became a Los Angeles County Sheriff’s Department deputy sheriff in 1988. He transferred to the Ventura County Sheriff’s Office in 1994 and has served the citizens of Ventura County for the past 24 years. Chris has climbed each of the ranks and worked challenging assignments in every division of the Sheriff’s Office, including major crimes Investigator and acting police chief for the cities of Ojai and Camarillo. He is also a recently retired lieutenant commander in the United States Navy Reserve. Chris currently serves as the commander of the Sheriff’s Support Services Division. As one of two Assistant Sheriffs, Chris will have executive-level oversight of the Patrol and Special Services Divisions. To read more about his, click here.

The Sheriff’s Office is the largest law enforcement agency in Ventura County, having more than 1,200 employees and providing police services to the unincorporated areas of the county, as well as the cities of Moorpark, Thousand Oaks, Ojai, Fillmore, and Camarillo. In addition, the Sheriff’s Office staffs and operates the county jails, courthouse security, a crime laboratory, a regional training center, an aviation unit, search & rescue resources, the Office of Emergency Services, and much more.

CVUSD Declining Enrollment: Where Have All The Children Gone?

Major University finds that the number of undocumented immigrants in the U.S. is roughly double previous estimates

(Westlake Village, Ca) At approximately 5:20pm, a 9-1-1 call was made from a home on Windward Circle to Thousand Oaks Police reporting a white adult male floating face down in the lake located in Westlake […]

(Ventura County, Ca) With just a few months left to Sheriff Geoff Dean’s term as Sheriff, the 40- year law enforcement veteran put together an all star cast for the #lipsync challenge with a showcase […]